Traveling light is the key to having fun in Bhutan. Casual clothes are most appropriate but if the trip is scheduled around a festival season, you should carry at least one set of dressy clothing. To kill the cold use a layering system; start with thermal underwear and ad a shirt, pile jackets and windbreakers. Don't forget to pack a folding umbrella and also bring a water bottle and iodine. Avoid wearing revealing clothes - women especially should not wear any short shorts, halter neck or tank tops. Trek to mountain area you will need expensive, expert mountain trekking gear. Do not forget to carry a pair of sneakers or walking shoes.

A primary feature of this land is its mountain ranges which are filled with wildlife and vegetation. The weather depends largely on the time of the year that you visit and the altitude of the place where you are visiting. In general, October and November (autumn) have a dry and mild climate and the temperature fluctuates between 70F (20C) to 90F (30C). December and January are dry and it gets chilly in the morning and night, but the temperature can reach up to 59F (15C) - 68F (20C). Late February, March and early April are the springtimes and the temperature is similar to the autumn. May and June are the pre-monsoon months with the hot and humid temperature that is accompanied by occasional evening thunderstorms. During July and early September, the monsoon hits this region, it rains almost every day and it is during this time that nasty downpours, humid air, and hot temperatures are to be expected. Though Bhutan can be visited all year round, it's best to visit during summer and spring.

Visa is required for entry into Bhutan. The traveler can obtain the visa on arrival at Paro Airport or at Phuentsholing if you are entering by road. You must apply in advance through a tour operator and receive approval before you travel to Bhutan. The Bhutanese Embassy only issues visas for the governmental project.

In Bhutan, the restaurant food is not particularly special but beware of the local dishes with chilies. There is a wide range of vegetarian food to choose from, but most of it is prepared using chilies and the primary ingredient and not as a seasoning, so ask the waiter what ingredients have gone in a dish before you order it. Popular Bhutanese dishes include ema taste, which comprises large green chilies dipped in cheese sauce and bake show league, which is basically stewed pork with radish.

After the meal is sure to try paan. It is a local Indian mouth freshener, which is sold by the street vendors at roadside shops. The paan is bittersweet tasting, mildly intoxicating concoction and it stains the mouth bright red.

Dzongkha, similar to Tibetan, is Bhutan's official language, although fortunately English is widely spoken amongst educated people and it is taught in schools. In the south, Nepali is widely spoken and in the east Sharchop is the main tongue. Numerous tribal languages are spoken as well, like Khengkha, Kurtoep, Mandip and Bumthap.

Bhutan is very much a rural country with no major cities and few big towns, where half the people live a day's walk from the nearest road, although it's mainly young population is growing at a rapid rate and it is thought to exceed one million people. The main ethnic groups are the Sharchops ('people of the east' of Indo-Mongoloid descent), the Ngalong (of Tibetan origin who live in the west) and the Lhotshampa (Nepalis who live in the south). 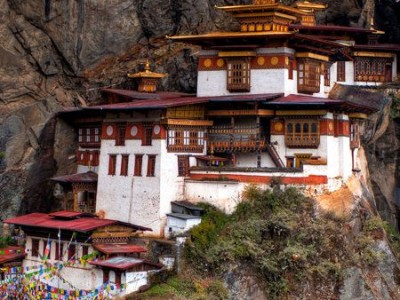 Bhutan is a famous mountainous country, located in the eastern Himalayas between India and China. It is also popularly k...