Manaslu region trekking is a famous trekking region in Nepal. Bordering the Annapurna Conservation Area to the west and the Tibetan Plateau to the north and the east, the Manasalu region lies in Gorkha District to the west of Kathmandu. Manaslu region areas are protected by the Manaslu conservation area, established in 1998 covering an area of 1,663 square kilometers and 7VDC. This region elevation starts from 1,400m to 8,156m the summit of Mt. Manaslu - the eighth highest peak in the world, In the Mansiri Himal range of the Himalayas in the Gorkha District. The area comprises mountains, glaciers, and watercourses. There are over 110 species of birds and three species of reptiles and over 1500-2000 species of flowering plants. Trek to Manaslu region is home to 33 species of mammals, including snow leopard, musk deer, and  the Himalayan Thar.

The Budi Gandaki River originates before reaching the Larke pass 5106m. The major ethnic group, the Gurungs, has been a strong attachment towards its traditional Tibetan Culture Heritage. Main opportunity to experience both nature and culture.  Main season of Langtang region mid-October to mid-December and from mid-February until mid-April the weather is usually clear but cold at higher elevations. 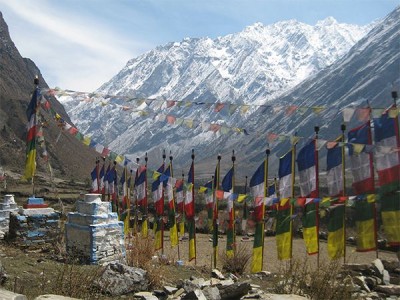 Tsum valley is a sacred Himalayan pilgrimage valley. It is located the midwestern part trans-Himalayan region of Gorkha,...